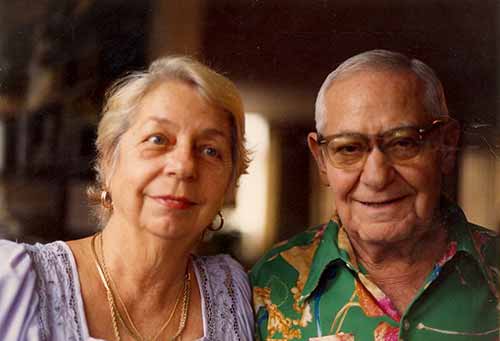 Thomas Sofos was born in Greece, on Nov. 25, 1925.  His father, Athanasios, contracted the Spanish flu & passed away during the world-wide epidemic, just before Tom’s birth.  His grandfather immigrated to the US with his widowed daughter & her two young children, Nora and Tom who were about 3 or 4 years old.  Tom’s mother remarried to a widower who had two children.  They moved to Baltimore, Maryland.  As Tom grew up, he received a presidential appointment to the Naval Academy at Annapolis, from which he graduated in 1943.  Tom came to Hawaii in late 1943 with the US Navy, just in time for the Leyte Gulf campaign in the Philippines.  He was shot during his 4th bombing mission and later injured in the Okinawa campaign by a Kamikaze attack on the aircraft carrier Bunker Hill.  He retired from the Navy, in late 1945.  He decided to stay in Hawaii since he liked the warm weather.

Catherine, nicknamed Rena, was born in St. Louis, Missouri, on September 11, 1922. Her father, Spiro Seros, was a Greek immigrant who had served in the U.S. Army in World War I and suffered from irreversible damages caused by a poison gas attack.  Spiro died around 1923.  Rena and her mother, Eugenia, returned to Greece.  Eugenia remarried and they lived happily until 1936 when they became concerned about a possible impending war.  Rena was sent back to the United States to live with a guardian.  She later enrolled in Berkeley University’s accounting school. At age 20, fresh out of accounting school, Rena became an auditor for the War Department (now the Defense Dept.), and was transferred to Hawaii in 1944 to review the post exchanges and other military facilities.

Sometime in January 1946, someone told Tom that there was a new Greek-American girl in town and he called her to invite her on a date.  They both spoke Greek and hit it off immediately.  On February 14, (Valentine’s Day) he proposed, and Rena accepted. They were married on March 1, 1946 by a justice of the people since there was no Orthodox Church in Hawaii at that time.  The formal Greek Orthodox wedding took place in Maryland in June 1946.

In 1947, Tom decided to go into the construction and development. He became a well know developer.  Tom and Rena had 4 children: Thomas Jr., Steven, Nicolas, and Stephany.

During those early years, the Greek community, periodically got together socially at parties attended by the Bukes, Anastasopulos, Proskefalas, Roumanis, Moskas, Chrones, and other families.  Several of these families pledged to work together to establish an Orthodox church in Hawaii.  The first step was to get an Orthodox priest to come to Hawaii to serve the Divine Liturgy.  Tom had several influential classmates at Annapolis who had attained the rank of Admiral.  Tom & Rena flew to the Pentagon in Washington DC to request that an Orthodox priest be stationed in Honolulu.

When the Church became a reality, there was a fundraiser held to name the church.  Families would make a donation for a specific name.  Rena suggested to Catherine Roumanis that they bid together and name the Church Constantine (for Catherine’s late husband) and Helen (for Rena’s mother-in-law).  They had the winning bid, hence the church’s name.

Rena was the first president of the Philoptochos, often served on the Philoptochos board, parish council and was the church bookkeeper for many years. Tom passed away July 15, 1997.  Rena passed in 2004.  Their legacy lives on.