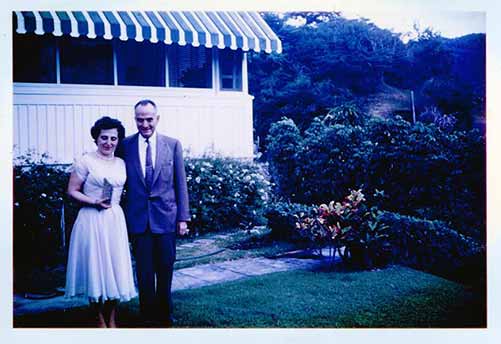 Many people have heard of Uncle Gus Lycurgus, an early Greek settler in Hawaii. Gus encouraged many young Greek men to come to Hawaii to live and work. One of these young men, was Costa Roumanis, of Goritsa which is a village near the town of Sparta. Costa joined Gus on the Big Island of Hawaii. He worked for many years at Volcano House and at the Hilo Hotel.

Around 1954, Costa took a trip to Greece and hoped to find a bride in Greece. While visiting his village, he was introduced to several lovely young women of marriageable age. The one who won his heart, was Catherine. Her mother told her that if she married Costa, she would be going far away where there were very few Greek people with which to socialize. Life would not be easy and she should think seriously about this. Catherine and Costa married, moved to the Big Island, and were a devoted, happy couple.

When Costa retired, they left the Big Island and moved to Oahu where they bought a house on Spencer street, in Makiki, next to Costa’s cousin, James Chrones who lived with his wife Afrodite and their daughter Catherine (Bukes). On the other side of the Chrones family was the Anastasopulos family. Costa and Catherine enjoyed the fellowship of these friends and relatives. Ironically, this area was just a few blocks from the location of the present Church. They also enjoyed cooking, gardening, entertaining guests, and having wonderful parties. They were always a gracious host and hostess and everyone enjoyed visiting their home. They helped establish the Church and were very devoted to it. They attended Church every week as this was very important to them. Catherine joined Rena Sofos in making the combined winning bid so she could name the Church in her husband’s honor. As such, she was one of the two Godmothers of Ss. Constantine and Helen Greek Orthodox Church.

Costa and Catherine lived quiet lives, devoted to each other, and helped many in Greece who were struggling following the horrors of World War II and the following Greek Civil War. They quietly helped many in need in Hawaii as well. They are both remembered as a couple who saw the best in everyone and only said good and kind things. They did not gossip, show anger or hot tempers, but were always calm and thoughtful. They opened their home to Catherine’s niece, Georgia Manos, from Greece. Georgia came to Hawaii around 1969 for political reasons.

She stayed in Hawaii and attended school. Costa passed away around 1973. Georgia helped comfort Catherine with her loss. In Catherine’s final years, including years of being bedridden, Georgia was her devoted companion and caretaker, rarely leaving her side. Catherine passed away in February 2011. Their legacy lives on.