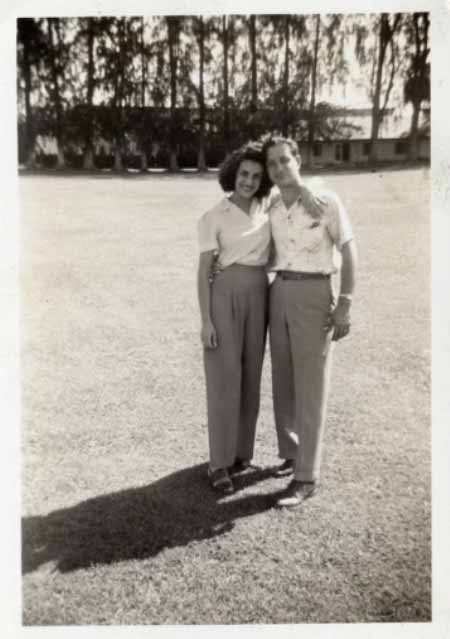 Peter and Fannie Proskefalas were blessed with long and fulfilling lives in Hawaii. The Greek Orthodox Community in Honolulu and Saints Constantine and Helen were essential parts of their lives. They left their homes on Staten Island, New York as young adults, and enjoyed 60 years of marriage in Honolulu. Early Life Their parents immigrated from the towns of Propoul and Atsiki in Lemnos, Greece, arriving at Ellis Island in 1915. Pete was born in New York City in 1917. Fannie was born on Staten Island, a borough of New York, in 1923.

When they were young, their families shared a farm on Staten Island. Each family lived in half of the farmhouse. Fannie and her two sisters helped their father with the farm work. She sold vegetables at their roadside stand and rode a wagon into Manhattan with her father to sell vegetables to make ends meet. Life was hard in the Depression, but the Immigrants were determined to make a better life for their children.

Pete and Fannie learned English in school, since their parents only spoke Greek at home. Although Pete and Fannie knew each other growing up in their tight knit Greek community, they didn’t date until 1942 when they were in the wedding party of Fannie’s older sister, Louise. Fannie was a high school senior when they began dating. They had a truly long distance relationship once Pete signed up in 1942 as a manual laborer to work on the rebuilding of Pearl Harbor. Pete was able to return to Staten Island on a 30 day leave to marry Fannie in May 1945 at Holy Trinity Greek Orthodox Church on Staten Island. Pete returned to Pearl Harbor after the wedding. Fannie signed up to work as a Government Clerk and was transported by the government cross country by train to California and by ship to Honolulu with many other women aiding the war effort.

Careers Pete enjoyed a 38 year career in civil service for the Navy at Pearl Harbor Public Works Center. He retired in 1973 as Superintendent of Transportation for the Navy. He won many awards over the years, for service improvements and financial efficiencies. He also served on the Board of Directors and was President of the Homeowners Associations at Foster Village and Makiki Manor.

Fannie worked for the Government as a clerk and had a 17 year career with the IRS. She decided to take care of Cindy full time once Cindy was in elementary school. Family They enjoyed many visits back to Staten Island to visit family and friends, and driving trips across the United States. Cindy was born in Honolulu in 1956 and baptized at Holy Trinity on Staten Island on their 1957 visit home. Pete had two sisters Roxane and Demetra, a brother Gregory and many nieces and nephews. Fannie remained very close to her parents, sisters Louise and Helen, and their families, despite the distance. They visited Cindy and son-in-law Michael Dell in California and Virginia frequently.

They were wonderful grandparents to Stephanie and Nicholas, reading to them and playing with them. The children were both spoiled by their Yiayia’s Greek cooking and baking. Pete never missed an opportunity to wear bright clothes and sing loudly in public. 5 Church Life Fannie devoted her time and talents to Saints Constantine and Helen in her second career. She was deeply involved in Philoptochos, serving as President for multiple terms, and was a member of the Thomas Square and Greek Festival baking crews. She represented the Philoptochos chapter at several Clergy-Laity Conferences. Pete served on the Parish Council and was President as well. He was an honorary member of Philoptochos and helped the Ladies with their festival work.

When Catherine and George Bukes moved to Honolulu, Pete and Fannie became close friends with them, forming an enduring Philoptochos Festival Baking team and lifelong friends and traveling companions. Pete and Fannie were dedicated members of the early Church community and were committed to founding the Church in Honolulu with the other families and support from the Archdiocese, Benefactors Mr. and Mrs. Chirgotis, and all of the donors over the years. When visiting their families on Staten Island, Pete and Fannie met with the Archdiocese to bring news of the parish and discuss the community’s needs. 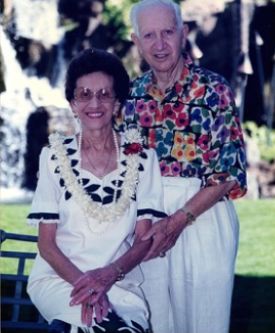 They both worked hard to welcome new members to the church and each new Priest and their families. They never forgot how difficult it was to live in Hawaii where there were few chances to see family. Pete passed away in 2006 at 88 years old. Fannie was 89 when she passed away in 2013. When Pete passed away, the memorial donations were used to commission a stained glass window in the church, which became a catalyst for others to complete the remaining unfinished windows in our beautiful Saints Constantine and Helen Cathedral of the Pacific