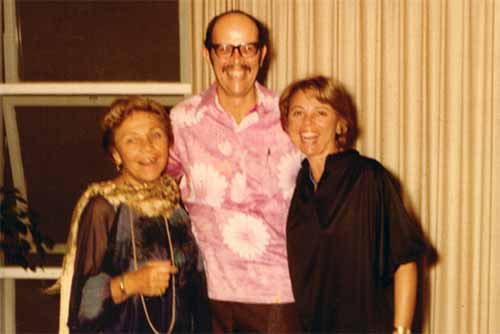 Helen Anastasopulos Potts was born in Honolulu, Territory of Hawaii on July 4, 1930. There was no Orthodox Church in Hawaii, and her mother had been instructed by the Metropolitan of Athens, to have her baptized in the Church of England, Helen graduated from Roosevelt H.S. She had a Liberal Arts education at U.H. and then went to the Univer-sity of Southern California for a 5th year. It was during that year that she was confirmed into the Orthodox Church.

Helen and her brother Teddy, as he was called, had a regular childhood as those growing up in the Great Depression. The yard of their Spencer Street home was graced with five mango trees: two Chinese, two Pirie, and a common mango, avocado, pumelo, black and white figs, pomegranates and coconuts. Helen and her brother would sit in the Pirie mango tree and eat mangoes. They preferred that mango because there were no strings. The Chi-nese mangoes were used by their father’s restaurant to make chutney. They ate Pirie mangoes until their mother yelled out of the window not to eat any more as the Chinese man was coming to buy the mangoes. He would pay 25 cents each and sell them to tourists in Waikiki for 50 cents. All of that ended with the bombing of Pearl Harbor.

Every Sunday, the family went on a picnic. Most often they went to Kailua Beach Park with other Greeks. They’d usually swim and then eat. At times they would go into the Iron Wood Forest which was located on the Mauka side of Kalaheo Ave. It was shady and quiet. Then about 4 p.m., they’d pack up and head for town. It’d take over an hour to get home as the road over the Pali was narrow and zig-zagged. Rounding the road at the top, the wind was very strong and sometimes blew clothes out of the car window. Then further down, they’d stop at Morgan’s Corner, where the small waterfall is, and everyone got out of the car and drank spring water on the side of the road. Dad would fill the radiator and then continue home.

Life in Hawaii changed drastically on December 7, 1941. Helen and her family endured curfew, ID cards, air raid shelters, and taking gas masks to school. Areas were surrounded by barbed wire and all homes had black out curtains. Gone were the carefree days.

When Helen returned to Honolulu after USC, she found a teaching position at Island Paradise School. She needed a few more credits to teach in public school. Obtaining those, she taught at Leilehua in Wahiawa, then in Aiea, and finally Washington Intermediate School.

In 1952, she married William D. Potts. Their daughter, Artemis Joan was born in 1958 and fell asleep in the Lord in 1993. Helen became an Eng-lish tutor at Roosevelt H.S. Great Danes were her dogs of choice. She liked to bake bread, work in the yard, and she was a potter. Potts pot was her mark. She used the wheel but also built pots by hand. She especially liked making Hawaiian dolls. She swam and walked along Kailua Beach. Helen enjoyed traveling, and in the 1970’s and 1980’s, went around the world two times, once on sabbatical. Helen and her mother Julia, lived in Greece for six months.

When her daughter Artemis passed away, Helen and her brother became the devoted guardians of her young grandson, Demitri Marmash, who wanted to remain in Hawaii rather than go to Baltimore.