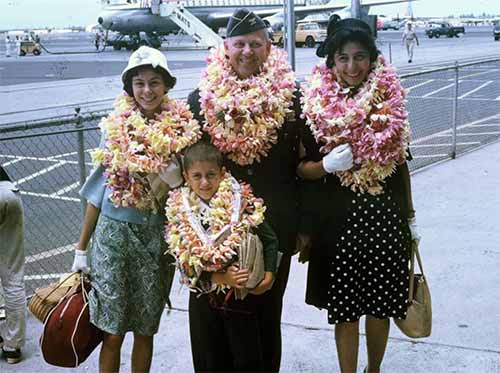 As told by Son, Bill Pappas Attached is a picture of my family on the day of our arrival at Hickam AFB in the summer of 1963... I'm the short one with the newspapers. Behind me are my sister Mary Ellen, my father Gus, and my mother Kathryn. The smell of the flowers in the leis remains one of my strongest and longest memories. In very little time my parents sought out other Orthodox faithful on the base and on the island.

My experience was limited to helping set up icons in picture frames on a mantle inside the base chapel and holding the occasional candle for the Gospel reading or the Great Entrance. I remember Dad doing a lot of singing, but I had little knowledge of anything else. All of a sudden it was Spring, 1964 and Easter was upon us. I remember serving as an altar boy for Fr. Peter Balam, who came to Honolulu for Holy Week.

More than that, I remember him staying with us at our home on Hickam for that week. His favorite word: “Battleaxe!” We held the services at St. Andrew's Cathedral, the largest church I had visited in my brief eight years of living. We had several other visiting priests, but I remember Fr. Peter more than the others. The big moment - spring 1965 - Archbishop Iakovos came to Honolulu. I was delegated to 3rd string altar boy, but I still remember it was a big deal. It was also around this time that my father signed the Charter for the first Greek Orthodox Church, along with Harry Moskos and Peter Proskefalas. In my mother's memoirs, she mentions that two other Orthodox members - Serge Dankevich (Russian) and Stephen Polansky (Polish) - were actively involved in the activities leading up to the founding of the church. She called it what my father would never say out loud - “his most important achievement.”

Dad passed away in 2006 - Mom in 2011. Shortly before my mother passed away, I received an email from Harry Moskos, copied below. I don't remember the incident, but it makes sense now why I was benched as an altar boy. Bill, Thank you for the update on your mother. While the news is not good, we sincerely appreciate you letting us know about her condition. We have very fond memories of our time together in Hawaii with the Pappas family. One of the funniest incidents was when we had church services with a visiting priest and you and another boy were the altar servers. After communion, you two ate the rest of the antidoron. At the end of the service, the priest explained why he didn't have any of the bread to give the congregation. It was such a great pleasure to count the Pappas family among the wonderful people we have met. Please give your mother our love. Our prayers are with you and your family. Again, thank you. -- Vicki and Harry Moskos [Not in picture: Son, James Pappas]

Gus Pappas served in the U.S. Air Force for 30 years, stationed at various Air Force bases stateside as well as Hickam AFB in Hawaii and various bases around southeast Asia. He served in WWII, the Korean War and the Vietnam War.