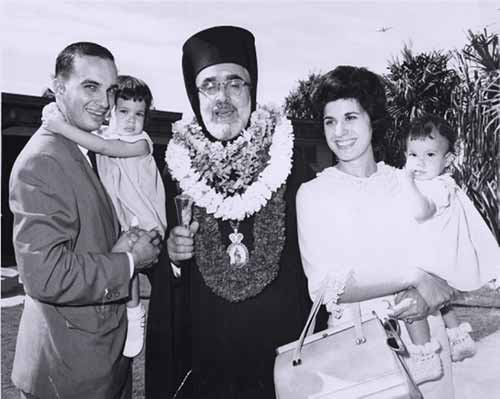 Harry and Victoria Moskos came to Hawaii in 1963 when Harry was named bureau chief of the Associated Press office in Honolulu.

Long active in the Greek Orthodox Church in Albuquerque, New Mexico, where they were married in 1962, Harry and Victoria were surprised to discover that Hawaii was the only state without any Orthodox Christian Church. One of their first efforts was to scan the telephone book to see if there were any Greek names. Much to their delight, they found listing after listing of the name “Papas” and started calling to find out that “Papas” with just one “p” is a Filipino name and not a Greek name.

Fortunately, Archbishop Iakovos included a stopover in Honolulu while flying to Japan and he readily agreed to celebrate the Divine Liturgy. This started the successful journey for the establishment of Sts. Constantine and Helen Cathedral. The first step was a visiting Air Force chaplain and then visiting Greek Orthodox priests. This led to the eventual assignment of an Air Force chaplain to Hickam Air Force Base.

The arrangement between the Archbishop and the Air Force was that after the chaplain’s tour of duty was completed a civilian priest would be assigned by the Archbishop.

Harry remembers the conversation with Archbishop Iakovos as he was driving him to the airport at the end of his first visit to Honolulu. He asked him how many times since he became a hierarch had he celebrated the liturgy by himself without a deacon or priest assisting him. He replied, “This was the first time.”

Harry and Victoria have three children. Their daughters were born at Kapiolani Maternity Hospital. Areti (Tina) was born October 25, 1964, and Xrisanthe a year later of November 14, 1965. Their son Matthew was born in Albuquerque on October 4, 1971.

They left Hawaii in 1969 after the Albuquerque Tribune, the Scripps-owned newspaper where Harry started his journalism career in 1953 while still a high school student, asked him to return to New Mexico as the newspa-per’s city editor. He later became managing editor. In 1980, Scripps named him editor of its El Paso, Texas, newspaper, the Herald-Post. Coincidentally, when they came to El Paso there was not a Greek Orthodox Church but there was one when they left in 1984 when Scripps named him editor of the Knoxville, Tennessee, News-Sentinel.

Harry was named an Archon of the Ecumenical Patriarchate in 1980. He served on the Archdiocese Council under both Archbishop Iakovos and Archbishop Spyridon.