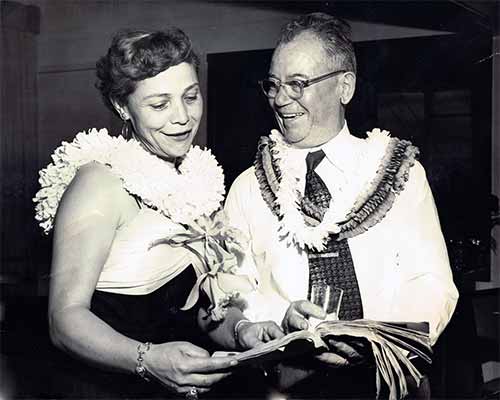 Demetrios Anastasopulos was born in Vassara, Sparta, Greece in 1892. His father, Theodore, was an agrarian police officer who was murdered before Demetrios was born. It was difficult for his mother, Helen to raise her three children. When Demetri was 15, he left Greece. His older brother had already left Greece for America. That brother, Peter, later in life became the father of Thalia (Tuohy). Demetrios arrived in New York with very little money. He shined shoes to earn money for a ticket to Boston where he had many relatives. He did not stay in Boston long, moving on to San Francisco. In 1908, at age 16, he booked passage to Hawaii. He, like many other of the early Greeks, went to the Big Island to work for Uncle George Lycurgus.

Demetri returned to Greece to fight during the Balkan War and after the War, returned to Hawaii. Demetri or Jimmy as he was known, his brother Peter, and another Greek immigrant, John Roumanis formed a partnership, and bought a restaurant on Fort Street in downtown Honolulu. It was called Nolte’s Saloon and had saw dust on the floor. The three spruced up the restaurant and renamed it Merchants’s Grill. Jimmy was the cook. In 1929, Jimmy returned to Greece, as was the custom, to find a bride. Julia Theophilis was born in Vassara in 1908. She was the fourth of twelve children. Her father was the only doctor of her village and the surrounding area. They married and returned to Honolulu.

It was difficult for Julia in her early years in Honolulu. She had companionship in her sister-in-law, Valentine who was Thalia’s mother. She also had cousins Athena Lycurgus, Poppy Detor, and George Gerasimos, the father of Helen (Chapin). Julia attended adult education classes at the YWCA with her good friend and koumbara, Aphrodite Chrones. Aphrodite’s daughter, Catherine (Bukes) was Julia’s Goddaughter. When Julia’s children, Helen and Theodore (Ted) were born and Julia was more fluent in English, she took part in community activities. Because there was no Orthodox Church in Hawaii in the 1930’s, Julia wrote to her father asking his advice about where they should attend church. Her father went to the Metropolis in Athens and was told to attend the Anglican Church. Helen was baptized at St. Andrew’s Cathedral and later, as a graduate student at USC in Los Angeles, she was confirmed at St. Sophia’s Greek Orthodox Church.

Julia had made a vow that she would baptize her son at a small monastery near the summer village. The events of WWII and the subsequent Greek Civil War made travel to Greece impossible for many years. The vow was fulfilled in 1952 when Ted was twenty. He took the name of the monastery, Saints Anargyroi. A very devout woman, Julia had brought Holy Water and icons with her when she left Greece. If her children became ill, she would give them Holy Water to drink. Julia kept all the Greek traditions and passed them onto her children. Julia made Vassilopita at New Year’s for her home and to give to her relatives on the Big Island. She also made the Easter Tsureki. In the early years of the new Church, Julia and Aphrodite baked these loaves for the Church. Many of the traditional recipes still used by the congregation were from these two women. Julia published a well known cookbook, entitled From Sparta to Honolulu. Julia was a devoted and loving grandmother to Helen’s daughter Artemis, and a devoted and loving great-grandmother to Arte’s son Demitri Marmash.