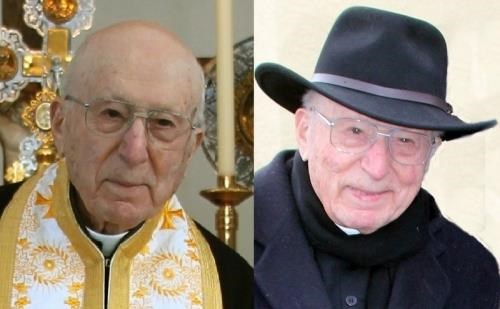 The Very Rev. A. Photius Pentikis was a devoted servant of the Lord for nearly 70 years, always maintaining the highest standards for his priesthood in the many parishes he served,” noted Metropolitan Gerasimos of San Francisco. “I had the opportunity to be with Father Photius this past September and was always uplifted by his genuine spirit.”

Fr. Photius was born in Fort Worth, Texas, on July 16, 1922, to James and Thespina Pentikis and lived there with his family until he completed high school.

He was the second youngest of 13 siblings, all of whom predeceased him. He enrolled at Holy Cross Seminary in Pomfret, Conn., and was ordained in 1948. Fr. Photius also studied at the historic Halki Theological Seminary in Turkey, and served as deacon to Ecumenical Patriarch Athenagoras.

He served numerous parishes in the West including: Holy Trinity in Portland, Oregon; Holy Trinity in Phoenix, St. Nicholas in Northridge, Calif.; Assumption in Seattle; St .Spyridon in San Diego; Sts. Constantine and Helen in Honolulu; St. Nicholas in San Jose, Calif.; and St. Sophia in Bellingham, Wash. The Bellingham parish was planning to recognize him during the weekend of Sunday of Orthodoxy in March during a forthcoming visit by Metropolitan Gerasimos of San Francisco.

A voracious reader, Father Photius’ home was filled with books and he was always eager to learn. He was also a prolific writer and has many unpublished works including extensive synopses on the Gospels of Matthew, Mark, Luke and John, the Epistles of Peter, James and John and the Book of Revelation.

Since his retirement, Fr. Photius resided in Bellingham, Wash. and was blessed to have the care and friendship of Fr. Mel Gimmaka from St. Innocent Antiochian Orthodox Church in Everson, Wash., along with his family, with whom he formed a very close bond for 20 years