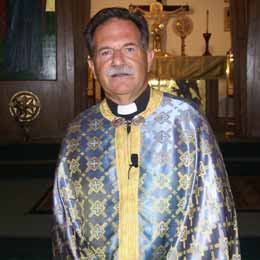 In 1981, Fr. John began graduate studies at Holy Cross School of Theology in Boston, receiving his M.Div. in 1985. Following graduation, he spent a year studying at the University of Thessaloniki, Greece. It was during this time that he met Presbytera Jamal, a native of Beirut, Lebanon, and they were married upon her arrival in the US in 1988. Fr. John spent the next eight years in the classroom again, this time teaching high school French and Spanish.

In November of 1996, Fr. John was ordained to the Priesthood in Sacramento, CA, where he served at the Church of the Annunciation as assistant for three years. In 1999, he was transferred to St. Nicholas in Tacoma, WA, then to SS Constantine & Helen, Honolulu in 2008.