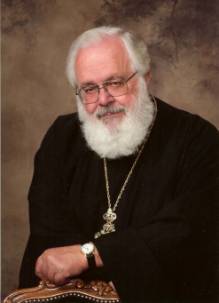 The Rev. Father Demetrius T. Dogias was born in Elizabeth, New Jersey, on 9 March 1939, to Thales and Mary Dogias, both of whom were originally from the island of Andros, Greece.  In September of that year the family moved to Poughkeepsie, New York, where Father received his primary and secondary education, and which he considers his hometown.

After six years as organist of the Assumption Greek Orthodox Church Choir, in 1957 Father graduated from Poughkeepsie High School, where he had been a member of the Band and of the Mixed Chorus.  In September of that year he entered the Holy Cross Greek Orthodox Theological School in Brookline.  While there, he was a member of the Choir and accompanist under the direction of Dr. Christos Vrionides, as well as library assistant, class officer, and a member of the Year Book Committee and the Missionary Society.

On 3 February 1963 Father married the former Eleutheria Tsakiris of Itea, Parnassidos, Greece, and Long Branch, New Jersey, at Saint George's in Asbury Park, New Jersey.  Two weeks later, on 17 February, he was ordained to the Diaconate at Atlantic City, New Jersey, and then on 10 March 1963 to the Holy Priesthood at Troy, New York; both Ordinations were celebrated by His Eminence Metropolitan Germanos Polyzoides.  After graduating from Holy Cross the following June-in a class which included His Grace Bishop Dimitrios of Xanthus and President of Holy Cross Father Nicholas Triantafilou-Father was assigned as of July 1 as Assistant Priest to the St. Paul Greek Orthodox Church in Hempstead, New York.

In 1965 Father Dogias was transferred to Saint George's in Oklahoma City, Oklahoma, and then in 1968 to Danbury, Connecticut.  While in Danbury he applied for and was granted a Taylor Scholarship from our Archdiocese to pursue graduate studies at the Fordham University Graduate School in the Bronx, New York, working toward an MA in Medieval Studies with a major in Byzantine History.

In 1971 Father was transferred as Assistant Priest to the Sts. Constantine and Helen Church in Washington, D.C., where he taught at the Rev. Thomas Daniels Parochial School, directed the Junior Choir and all the many youth programs, and in addition was Spiritual Advisor to the several afternoon Greek Schools maintained by the Parish.

In 1974 he was assigned to the Saint George Greek Orthodox Church in Albuquerque, New Mexico.  As the only Priest in New Mexico at that time, Father ministered to the entire state.  He was the founder of the annual Grecian Festival, and in 1976 he hosted the first ever visit of His Eminence Archbishop Iakovos-of blessed memory!-to the Parish, along with Bishop John, then of Thermon, and the then Archdeacon Methodios Tournas (now Metropolitan of Boston); it was during that visit that the Rev. Father John Bakas, now Dean of St. Sophia Cathedral in Los Angeles, was ordained to the Holy Diaconate. During that time in Albuquerque, Father was elected by his peers to serve on the National Presbyters Council. He was also appointed to a term on the Diocesan Council of the Diocese of Denver, as well as the Youth and the Religious Education Committees.

In 1981, Father accepted the invitation of His Grace Bishop Anthony of San Francisco-the later Metropolitan of blessed memory!-to assume the pastorate of the Greek Orthodox Church of the Annunciation in Sacramento, California.  And it was from there that he retired in August 2006, after twenty-five years of service to Sacramento, and forty-three years as a Priest of our Holy Archdiocese.  While in Sacramento, Father rejuvenated the local Philoptochos Chapter, and all the many Youth Programs, and established the many facets of the Adult Religious Education Program, including Catechism, Bible Studies, and Byzantine and Church History classes.  He was a loyal member of the Choir, and participated as such in the Choir's various concerts and other musical presentations and activities, including helping to host the Metropolis of San Francisco Choir Conference on two occasions.  He arranged several Greek folk songs for the Choir, and transposed certain hymns from the original Byzantine notation to western European notation.

Further, Father was responsible for missionary efforts in Marysville-Yuba City, in Redding, and in Roseville-the last two of which are now full Parishes of our Archdiocese.  On the local ecumenical scene, Father Dogias was co-founder of the Fellowship of Eastern Christian Clergy, an effort for better understanding and cooperation between the Orthodox, Eastern-Rite Catholic, Armenian, Coptic, and Church of the East Clergy of the greater Sacramento area.   He was also a member of the Northern California Ecumenical Conference, and hosted the National Day of Prayer observance on two occasions.   During this time, Father was again elected to serve on the National Presbyters Council, and served for two years as President of the Metropolis of San Francisco Clergy Syndesmos.  In addition, at the appointment of Bishop-later Metropolitan-Anthony, he served for over twenty years as Vicar and President of the Spiritual Court of the Central Valley Region of the Metropolis of San Francisco.  In 1988, at his twenty-fifth anniversary in the Holy Priesthood, Father was granted the title, Protopresbyter of the Ecumenical Throne, by the Ecumenical Patriarch.

Since February 2007, and at the invitation of His Eminence Metropolitan Gerasimos of San Francisco, Father and Presvytera have been in Honolulu, Hawaii, where Father is serving as interim Priest at the Sts. Constantine and Helen Greek Orthodox Cathedral of the Pacific.

Father Dogias has written several articles appearing in the Orthodox Observer, as well as another accepted for publication in the Greek Orthodox Theological Review.   He is the author of a recent study detailing the presence of Byzantine Imperial bloodlines in today's European royalty, as well as of an as yet unpublished book, Alexander the Great and His Descendants: the Empire of Ellas, a ‘what if' book of fiction imagining how drastically world history would have changed had Alexander lived until 67 years old, rather than dying in his thirty-third year.

It is with great sadness that the Greek Orthodox Metropolis of San Francisco announces the passing of Rev. Fr. Demetrius T. Dogias, who fell asleep in the Lord on February 4, 2013 at his home, surrounded by his loving family. Father Demetrius was a distinguished priest in the Greek Orthodox Archdiocese of America, having been ordained nearly 50 years ago, on March 10, 1963 by His Eminence Metropolitan Germanos Polyzoides in Troy, NY.

“Father Demetrius was a priest whose entire life emulated his love for the Lord. He was fully devoted to his ministry, and joyfully shared his faith with the people he served, always striving to lead them on the path of eternal salvation in the Lord,” stated His Eminence Metropolitan Gerasimos of San Francisco. “Father Demetrius’ departure from this life leaves a tremendous void for his family, his parishioners and all those whose lives he touched during his ministry. It is my fervent prayer that God will comfort their grieving hearts and grant eternal rest to our most worthy brother in the Lord.”

Father Demetrius was born on March 9, 1939 in Elizabeth, NJ and raised in Poughkeepsie, NY. He was the first of four sons born to Thales and Mary Dogias, originally from Andros, Greece. After completing his elementary and secondary education in Poughkeepsie, Father Demetrius was accepted into the Holy Cross Greek Orthodox School of Theology, where he earned a Bachelor of Arts degree in Theology in 1963, ranking among the top three in his class. Through the Taylor Scholarship granted by the Archdiocese, Father Demetrius continued his studies at Fordham University in the Bronx, NY earning a Master of Arts degree in Medieval History with an emphasis on Byzantium in 1971.

Among the parishes served by Father Demetrius were: Saint Paul – Hempstead, NY from 1963 – 1965; Saint George – Oklahoma City, OK from 1965 – 1968; Assumption – Danbury, CT from 1968 – 1971; Saints Constantine and Helen – Washington, DC from 1971 – 1974; Saint George – Albuquerque from 1974 – 1981; and the Annunciation – Sacramento, CA from 1981 until his retirement in 2006. He also nurtured the establishment and growth of the nearby parishes of Saint Katherine in Elk Grove, CA and Saint Anna in Roseville, CA. Always with a zeal for serving the Lord, Father Demetrius continued to offer his leadership during his retirement by serving as interim Dean of Saints Constantine and Helen Cathedral – Honolulu, HI from 2007 – 2008, and substituting at parishes throughout the Metropolis whenever there was a need.

A noted scholar, researcher and avid reader, Father Demetrius taught numerous classes at the many parishes he served, sharing his love of learning and his passion for the faith with people of all ages. A gifted musician, Father Demetrius excelled in his musical studies as a chanter, and also served as the choir accompanist under the famed choral conductor and composer, Dr. Christos Vrionides during his time at Holy Cross. In each of his parishes, Father Demetrius was especially supportive of the music ministry, encouraging the choir and chanters in their participation in the Liturgical life of the church. During his 26-year tenure at the Annunciation Church in Sacramento, Father Demetrius was at church every Thursday evening, joining in praise and song with the choir at their weekly rehearsals.

A Trisagion Service will be prayed at the Annunciation Greek Orthodox Church in Sacramento at 8:00 p.m. on Thursday, February 7. The Orthros and Divine Liturgy will also be prayed at the Annunciation Church beginning at 8:00 a.m. on Friday, February 8, followed by the Funeral Service at 11:00 a.m. His Eminence Metropolitan Gerasimos of San Francisco will officiate at these services. Father Demetrius will lie in state earlier in the day at the Saint Anna Church in Roseville, CA beginning at 2:00 p.m., concluding with a Trisagion at 6:00 p.m.

May his memory be eternal!