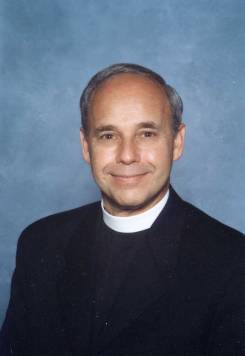 Fr. Dean is a 1965 graduate of the Holy Cross Greek Orthodox Theological School.  Upon his graduation, he moved to Denver, Colorado where he served as lay assistant, Youth Director and Greek School Teacher at the Assumption parish of Denver, Colorado. He also attended University of Denver School of Theology.

In Denver, he met his wife, Elaine, daughter of Nicholas & Constantina Papageorge. They were married in Denver on January 2, 1966. Elaine has a degree in Elementary Education from the University of Utah. Since 1985 she has been a Realtor.

Fr. Dean and Presvytera Elaine have two children, George and Anna and three grandchildren. George is a graduate of Birmingham Southern College with a degree in Business. He serves The White House Office of Presidential Advance as an Advance Representative to President Bush. He and his wife, Venessa live in Boca Raton, Florida. They have one daughter, Athena Venetia.

Anna is a graduate of Loyola University with a degree in Advertising and Marketing and is married to George N. Catranis. They live in Mobile, Alabama and are associated with Catranis Enterprises. They have two sons, Nicholas and Constantine. George & Anna.

Fr. Dean  was ordained a deacon on January 30, 1966 in Denver, Colorado and a priest in his home parish of Dayton, Ohio on February 20, 1966. A week later, he assumed his first assignment in Waterloo, Iowa. In addition to serving the parish, he became certified in drug and alcohol abuse counseling.

In 1968, he was assigned by Archbishop Iakovos as the first priest of the newly established parish in Honolulu, Hawaii. During his tenure there, the parish grew and was able to purchase their first church property at 17 Old Pali Place. Locally, he served as the Vice President of the Honolulu Council of Churches and also received and hosted His Excellency, Makarios, President & Archbishop of Cyprus.

In 1970, he returned to the mainland to serve the Pensacola, Florida parish.  During his fifth year of service, the church was consecrated and His Eminence Archbishop Iakovos honored him with the offikion of Sakellarios. During those five years, he also served the mission parish in Ft. Walton Beach, Florida and was instrumental in transforming it to a full time parish. He served the Diocese as Chairman of a new Youth Pilot Program, much of which is still in use to this day.

In 1975, he was assigned as the Proistamenos of the Holy Trinity and Prophet Elias parishes of Salt Lake City, Utah. During his six year tenure, he established many new ministries and served as the Diocese of Denver Youth Commission Chairman. He was instrumental in establishing Diocese retreats for Goyans and Young Adults. He also served as a member of the Archdiocesan Presbyters Council. Archbishop Iakovos honored him with the offikion of Economos.

In 1981, he returned to the South to serve the Mobile, Alabama parish and the Malbis Memorial Church. Father Dean served the Diocese of Atlanta as a member of the Diocese Council, Chairman of Diocese Clergy Laity Congress, Chairman of Religious Education Commission and Chairman of the YAL Commission. His Grace, Bishop John honored him with the offikion of Protopresbyter of the Diocese of Atlanta.  In 1983 he organized a committee to raise funds to send the entire GOYA of the parish to the Ionian Village.  He returned to the Ionian Village numerous times during the 1980’s and in 1999 led the Byzantine Venture to Greece and the Patriarchate.  In 1990, he was the Team Leader for the Mission Team to Uganda, which built a church in the village of Magoma. Locally, he served as co-chair of Helping Hands For The Children which established a Women’s & Children’s Hospital in Mobile. Fr. Dean co-chaired of the Orthodox/Catholic Dialogue held in Gulf Shores and was chairman of the Mobile Interfaith Council. He also served on the Archdiocesan Council. In 1990 he was honored with the Offikion of Protopresbyter of the Archdiocese.

In 1992, Fr. Dean was transferred to Orlando Florida to  serve as the Proistamenos of the Holy Trinity Greek Orthodox Church of Greater Orlando.  Under his leadership the parish grew from 176 families to nearly 600 families.  In addition to establishing many new ministries, he oversaw the building of a new community center, served as President of the NCCJ Interfaith Council, was chairman of the 34thArchdiocesan Clergy Laity Conference held in Orlando and continued to serve on the Archdiocesan Council.

Fr. Dean retired on September 1, 2005 and continues to serve as a supply priest in the Metropolis of Atlanta. He has served as a Board Member and Chaplain of the Saint Photios Shrine in St. Augustine, Florida.  Currently, he is serving on the Board of Trustees of the Retired Clergy Association as a board member and Treasurer.