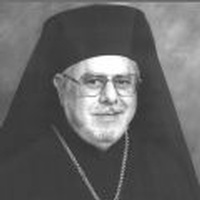 The Very Reverend Archimandrite Cyril Loeb, a priest of the Greek Orthodox Church, fell asleep in the Lord on September 4, 2010. He was 72.

Father Cyril was born Edwin Martin Loeb on March 29, 1938 in Chicago, Illinois. Son of the late Carl and Ruth Loeb, he spent his early years on Chicago's North Side where he was active in Boy Scouts of America, earning the rank of Eagle Scout in 1952. He graduated from Senn High School and earned his undergraduate degree from the University of Illinois.

After working for an American firm in Germany as a paralegal, he returned to the U.S. and earned a Bachelor of Laws degree from Blackstone School of Law in 1969. Loeb relocated to the Los Angeles area where he worked as legal counsel for several financial firms before deciding to sell his Van Nuys home and pursue his long-standing desire to serve as a priest.

He began studies in the Eastern Rite of the Roman Catholic Church, was ordained as a Sub-Deacon and concurrently completed academic work for his masters degree in Eastern Christian Theology at John XXIII Center in New York. Exposure to Early Christian writings and Eastern Christian spirituality led Father Loeb to embrace the Holy Orthodox Faith under the guidance and sponsorship of Bishop Maximos of Pittsburgh. In 1982, he was Chrismated in the Orthodox Church and entered Holy Cross School of Theology in Brookline, Massachusetts.

Father Cyril was active in student government and pastoral care outreach programs during his time in seminary. He also served as temporary administrator at St. Gregory Palamas Monastery in Hayesville, Ohio, until his ordination into the Holy Diaconate in August 1984. Father Cyril was ordained to the Holy Priesthood by His Grace Bishop Anthony of San Francisco, of blessed memory, on March 31, 1985.

His first assignment was as assistant priest at St. John the Baptist parish in Anaheim, California. After two years he was transferred to St. Demetrios Greek Orthodox Church in Camarillo, California where he served 13 months before being assigned as the Executive Director of the Saint Nicholas Ranch and Retreat Center in Dunlap, California in 1988, where his priestly charge combined with his business and legal acumen and experience allowed him to bring the ranch operations to order and solvency.

Father Cyril was elevated to the rank of Archimandrite by Metropolitan Anthony in 1988. He was transferred to the Saints Constantine and Helen Parish in Honolulu, Hawaii, where he set the church on the path to becoming a cathedral. On October 1, 1992 Metropolitan Anthony appointed Fr. Cyril as Chancellor of the Metropolis of San Francisco. After a year, Fr. Cyril requested that he be reassigned to the position of Parish Priest and he returned to St. Demetrios in Camarillo where he served until his retirement on August 15, 2004. Under his leadership, programs of the parish were strengthened and land was purchased for the future growth and expansion of St. Demetrios.

Fr. Cyril was an avid, world-wide traveler throughout his retirement. He was nearing the end of a North Sea Cruise when he fell asleep in the Lord.