The Publican & The Pharisee - 16thSunday Of Luke 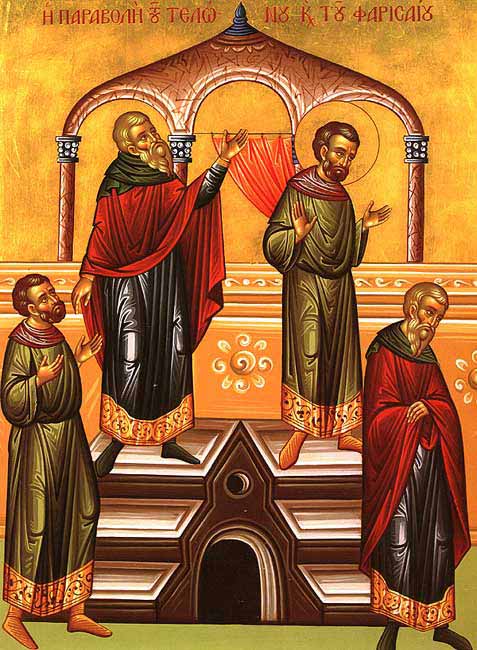 Also He spoke this parable to some who trusted in themselves that they were righteous, and despised others: “Two men went up to the temple to pray, one a Pharisee and the other a tax collector. The Pharisee stood and prayed thus with himself, ‘God I thank You that I am not like other men—extortioners, unjust, adulterers, or even as this tax collector. I fast twice a week; I give tithes of all that I possess.’ And the tax collector, standing afar off, would not so much as raise his eyes to heaven, but beat his breast, saying, ‘God, be merciful to me a sinner!’ I tell you this man went down to his house justified rather than the other; for everyone who exalts himself will be humbled, and he who humbles himself will be exalted.”

The Sunday of the Publican and the Pharisee begins a preparatory period of four Sundays that lay the foundation for our Lenten journey. Even before Great Lent begins, we enter the Triodion period. The Triodion which literally means “three odes,” is the liturgical book used during the Lenten period.

In the simple but powerful Gospel of the Publican and the Pharisee, humility is laid before us as the first and most important virtue in our journey to heaven. We, too, need to call upon God for His mercy and be watchful that any spiritual gains we experience are by the grace and love of God. The passage tells us that Jesus shared this parable for those who trusted in themselves. As Christians, we are called not to be obedient to our own will but to be obedient to God’s will for our lives. Obedience leads to humility. This is especially important to remember as we live in a world that views humility as a weakness.  If we humble ourselves before God and surrender our will to His, we will then experience true strength.

Lord and Master of my life, do not give to me the spirit of laziness, idle curiosity, love of power, and vain talk.

But grant me, Your servant, the virtues of moderation, humility, patience, and love.

Yes, Lord and King, allow me to see my own faults and not to judge my brothers and sisters. For you are blessed now and forever and unto the ages of ages. Amen.

Years ago, a 10-year-old boy approached the counter of a soda shop and climbed on a stool. “How much is an ice cream sundae?” he asked the waitress. “Fifty cents,” she answered. The boy reached deep in his pockets and pulled out an assortment of change, counting it slowly as the waitress grew impatient. “Well, then, how much would just plain ice cream be?” he asked. Really irritated by the time the boy was taking, the waitress coldly replied, “Thirty-five cents.” Again, the boy slowly counted his money. “May I please have some plain ice cream?” He gave the waitress thirty-five cents and she brought him ice cream, glad to finally be done with him. Later, after the little boy left, she returned to clear the boy’s dish, and when she picked it up, she stopped. There on the counter the boy had left 2 nickels and five pennies. She realized this young boy had enough money for the sundae, but wanted to have enough to leave her a tip.

Glory to the Father and the Son and the Holy Spirit, both now and forever and to the ages of ages. Amen.

In days of old, humility exalted the Publican who cried aloud, lamenting, “Be merciful,” and he was justified. Let us all follow his example, for we have fallen down in sin. Let us cry to the Savior from the depths of our hearts: We have sinned, be merciful, You who alone loves mankind.

—from the Vespers of the Publican and Pharisee