The Myrrhbearers, Joseph Of Arimathea, And Nicodemus - The 3rd Sunday Of Pascha 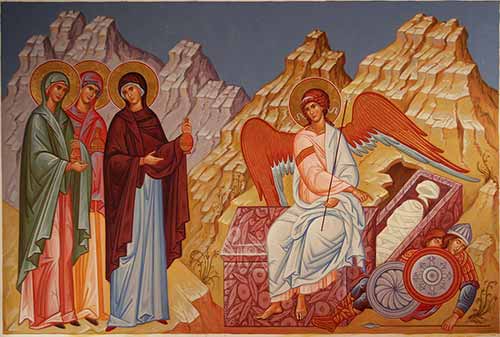 Joseph of Arimathea, a prominent council member, who was himself waiting for the kingdom of God, coming and taking courage, went in to Pilate and asked for the body of Jesus. Pilate marveled that He was already dead; and summoning the centurion, he asked him if He had been dead for some time. So when he found out from the centurion, he granted the body to Joseph. Then he bought fine linen, took Him down, and wrapped Him in the linen. And he laid Him in a tomb which had been hewn out of the rock, and rolled a stone against the door of the tomb. And Mary Magdalene and Mary the mother of Joses observed where He was laid. Now when the Sabbath was past, Mary Magdalene, Mary the mother of James, and Salome bought spices, that they might come and anoint Him. Very early in the morning, on the first day of the week, they came to the tomb when the sun had risen. And they said among themselves, “Who will roll away the stone from the door of the tomb for us?” But when they looked up, they saw that the stone had been rolled away—for it was very large. And entering the tomb, they saw a young man clothed in a long white robe sitting on the right side; and they were alarmed. But he said to them, “Do not be alarmed. You seek Jesus of Nazareth, who was crucified. He is risen! He is not here. See the place where they laid Him. But go, tell His disciples—and Peter—that He is going before you into Galilee; there you will see Him as He said to you.” So they went out quickly and fled from the tomb, for they trembled and were amazed. And they said nothing to anyone, for they were afraid.

Jesus could have first revealed His Resurrection to anyone, but remarkably He chose a group of faithful women. These women, despite the risk they were taking, went to anoint Jesus’s body in the tomb. They had no idea how the rock in front of the tomb would be removed, but their faith and love made them set out anyway. They were the first witnesses to the Resurrection—the first to share it with the world! Although they loved the Lord so much and had such great courage, it is remarkable to see how their faith was still limited. They did not yet believe in the Lord’s words concerning His Resurrection. Everything else Jesus had foretold about Himself had happened: His passion, the cross, and death. Yet, His words that He would arise from the dead had not yet penetrated their hearts. We understand from this that faith in the Resurrected Lord is ultimately a gift we receive from the Lord Him self. He reveals Himself to us as our Resurrected Lord. The lives of the Myrrhbearing Women, as well as the lives of all the apostles and saints throughout the centuries, were fundamentally and permanently changed by belief in His victory over sin, death, and the devil.

Joseph was a wealthy nobleman who asked Pilate for the body of Jesus and buried Him in his own tomb, perhaps saving His body from being thrown into a pit after death as was done with criminals (which is what Jesus was considered). Nicodemus was a leader among the Jews, a Pharisee who believed in Jesus and visited Him in private. For their roles and obedience to Jesus Christ, Joseph of Arimathea and Nicodemus along with the Myrrhbearing Women are commemorated as saints of our church.

Mark how great the women’s assiduity. They had followed Him, ministering to Him, and were present even to the time of the dangers. This is why they also saw all: how He cried, how He gave up His spirit, how the rocks split, and all the rest. These women were the first to see Jesus; the gender that was most condemned is the first to enjoy the sight of the blessings; this gender shows its courage the most. And when the disciples had fled, these women were present…Do you see their courage? Do you see their affection? Do you see their noble spirit in matters of money? Their noble spirit even unto death? —St. John Chrysostom

When You did cry, “Rejoice,” unto the Myrrhbearers, You did make the lamentation of Eve the first mother to cease by Your Resurrection, O Christ God. And You did bid Your Apostles to preach, “The Savior is risen from the grave.” —Kontakion for the Sunday of the Holy Myrrhbearers

Liturgy
"We knew not whether we were in heaven or on earth, for surely there is no such splendor or beauty anywhere on earth. We cannot describe it to you; we only know that God dwells there among men and that their Service surpasses the worship of all other places..." Learn more»