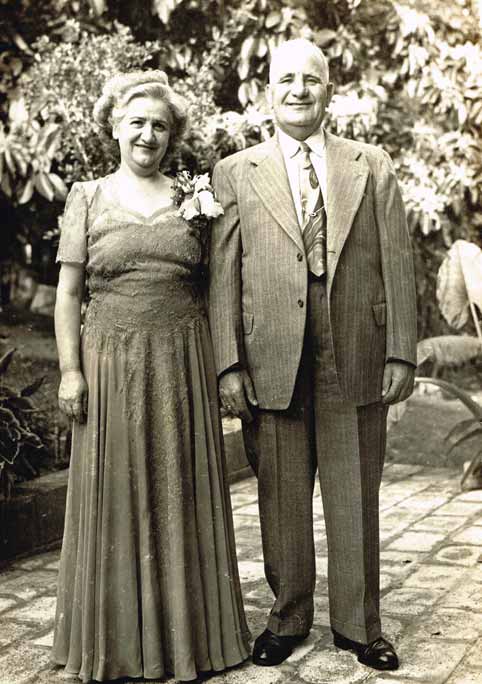 James (Demetrios) was born in Gortsia, Sparta, Greece on 8/29/1889. He arrived in Hawaii in 1907 and went to the Big Island of Hawaii to work for George Lycurgus. In 1927, he returned to Greece to see his mother and there married Aphrodite Coumandarakis, returning to Hawaii in 1928. Jim and Aphrodite settled in Honolulu. He and his brother George purchased a couple of lunch wagons before purchasing the Monte Carlo Restaurant on Hotel Street between Fort Street and Bethel. They also leased the Cafeteria at Pearl Harbor. James was born Demetrios, but changed his name to James to be more American.

Every Friday, James would go home early from Pearl Harbor taking ice cream for the children. When his came went up the driveway, the children would run outside yelling, “you scream, I scream, we all scream for ice cream.”

In the 1930’s, Jim, in order to make ends meet, raised chickens in the backyard. He’d collect and sell the eggs. He also was a beekeeper. When it was time to harvest the honey, the children would be on hand to get the honey comb to eat. Jim was also an avid gardener and whatever he planted grew. He had mango, citrus, flowers and avocadoes. A type of avocado was named for him. When he got rid of the chickens, he converted the chicken coop to a green house where he raised orchids.

After the bombing of Pearl Harbor, Jim was forced to sell the cafeteria back to the navy, but he continued to run it for the navy until they were able to find someone else to run it. He and his brother George continued to operate the Monte Carlo. Every Sunday, they held an open house for servicemen of Greek descent who enjoyed and appreciated the opportunity for Greek food and Greek dancing. Jim’s daughter, Catherine, met her future husband, George Bukes, at one of these open houses.

Aphrodite Coumandarakis was born in Voutianos, Sparta, Greece on 11/16/1898. When she was six, her mother died. Later she stayed home to care for her two brothers and four sisters. After her sisters married, she continued to maintain the home and to cook impressing Jim’s mother, who selected her as Jim’s bride.

When Aphrodite arrived in Hawaii it was difficult for her as she had no relatives here. Fortunately, there were other Greek women with whom she could speak. She was a homemaker taking care of her husband and daughter, Catherine, cooking and sewing. Julia Anastasopulos, was her koumbara as Julia was the Godmother of Catherine. Julia moved into the house next door and they went shopping together. To better learn the English language, they took classes at the YMCA on Richard’s St. and would go to the movies. Julie had a live-in maid who watched the children. Julia and Aphrodite often baked together and sometimes went to Pearl Harbor to bake their Vasilopita or Tsurekia making ten pounds at a time. It was easier for them as the ovens were huge and many. At home, they’d help each other make diples and baklava. They made their own filo, throwing it into the air and stretching it.

After the bombing of Pearl Harbor, Dec. 7, 1941, Jim couldn’t leave Pearl Harbor as the cafeteria was constantly filled with service men. The civilian population was terrified that the Japanese would attack and overrun the island. With Jim rarely able to come home at night, Aphrodite and Catherine went to Julia’s house to sleep. Julia slept with a hatchet under her pillow until the Battle of Midway, the turning point of the war.

The Anastasopulos family dug a bomb shelter in their front yard, which was also used by Aphrodite and Catherine. One time when the sirens blew and the radio announcer said to take cover, it took Aphrodite a long time to come to the shelter. She arrived with a stack of blankets and was asked what took her so long. She replied, “the announcer said to take cover so I gathered the blankets.” The bomb shelter was well stocked. It had an icon and a bottle of bourbon.

Aphrodite was good with children. She loved them all. They called her Diti because they couldn’t pronounce her name. Each morning and after her afternoon nap, she would drink a cup of Greek coffee at her home where Julia or Thalia’s grandmother would join her or she would go to their homes. Jim had the green thumb but Aphrodite was a math whiz. She could solve a math problem in her head before anyone with a paper and a pencil.

When the community moved to 17 Old Pali Place, Jim and Aphrodite were extremely proud of their church. They always sat in the first row. They celebrated their 50th anniversary in 1977. Jim passed away on 11/29/1977 and Aphrodite 9/27/1984. Their legacy lives on.

Liturgy
"We knew not whether we were in heaven or on earth, for surely there is no such splendor or beauty anywhere on earth. We cannot describe it to you; we only know that God dwells there among men and that their Service surpasses the worship of all other places..." Learn more»